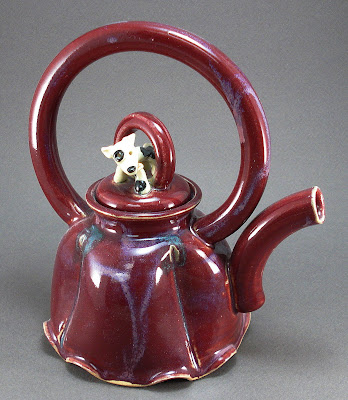 (red doggy teapot)
I had submitted this groovy teapot to a competition and won a spot in Chicago's Chiaroscuro Gallery teapot show. HoWEVER, I couldn't find its pic or any mention of my work on their web page the day they opened.
I hunted around, the gallery wasn't sure what happened, and so I called the curator and judge.
AH HA! The usual problem that I have: they were unpacking the 55 teapots for the display in the gallery before the show was set up and begun. A man from overseas saw mine and said he wanted it. They said he couldn't have it. He was insistant, saying he was flying back across the ocean and HE NEEDED MY TEAPOT, so they took his money and packed my teapot for him, before the show began. Well then! (reportedly teapots in this show range from 60 dollars to 2600 dollars each--mine at $125, esp. considering it is wonderful, must have seemed like a steal).

PS--HA! Just had an email from them, they want to stock my pots year round, what an honor!
Posted by Gary's third pottery blog at 1:09 PM

It must be tough to be so desired.

Wooohoooo! That teapot had been my favorite from the first time you posted it. If I were you, I would want to find that guy, too!

Congrats on being chosen to be a supplier, but they should really let you be in the contest, too!

Beautiful pot. That guy from oversees was lucky to get it.

That's sooo cool! And I love the post about clay on the hairdryer. M should be used to it by now!! :) You guys crack me up!!

WHOOOP FOR YOU! I wonder if you could have received more $$$ if it was on display.

They want to stock you all year round!!! Totally Wonderiffic, Gary!

Now THAT is a great thing to happen anytime, but especially during your birthday week! Congratulations!

Well, durn that old fool's hide! The one with extraordinarily good taste. That was MY teapot! I really loved it, and WANTED it!
But I DO feel compensated by hearing the news that they want to have your products all the time. Them's obviously folks with good sense. Do you get a signed contract and the major portion of the moolah, I hope?

Congratulations.... And a belated happy birthday too!

Aha! Just the excuse I need for a trip to Chicago. :-)

congratulations gary! what a dreamy deal.

Hopefully they will actually get a chance to show your work before it snapped up!