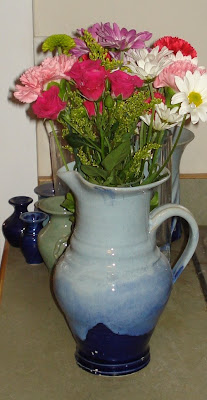 (pitcher by Gary Rith)
It was a bit of an odd morning. I had my last Cornell beginning pottery class this am, and I managed to break 2 rather perfect lids, rats! I happened to be demonstrating lid making, so I made replacements, but TWO lids? Put me off my game briefly. Then we had an IMPORTANT errand, but somebody wrote in crayon on the store's door they had to close for a few days.
The only thing you can do is buy the wife a bouquet of flowers for Easter week. Turn the Karma around, perhaps. It worked! Gave her flowers and she took me to my favorite ratty bar. NICE!
We are celebrating Easter week, esp. this year because my birthday is Wednesday. HA! Lots of fun this week, even if snow slop is expected all week!

Three fools died and are at the pearly gates of heaven. St. Peter tells them that they can enter the gates if they can answer one simple question. St. Peter asks the first fool, "What is Easter?" He replies, "Oh, that's easy! It's the holiday in November when everyone gets together, eats turkey, and are thankful..." "Wrong!," replies St. Peter, and proceeds to ask the second fool the same question, "What is Easter?" The second one replies, "Easter is the holiday in December when we put up a nice tree,exchange presents, and celebrate the birth of Jesus." St. Peter looks at the second fool, shakes his head in disgust, tells her she's wrong, and then peers over his glasses at the third fool and asks, "What is Easter?" The third fool smiles confidently and looks St. Peter in the eyes, "I know what Easter is." "Oh?" says St. Peter, incredulously. "Easter is the Christian holiday that coincides with the Jewish celebration of Passover. Jesus and his disciples were eating at the last supper and Jesus was later deceived and turned over to the Romans by one of his disciples. The Romans took him to be crucified and he was stabbed in the side, made to wear a crown of thorns, and was hung on a cross with nails through his hands. He was buried in a nearby cave which was sealed off by a large boulder." St. Peter smiles broadly with delight. Then he continued, "Every year the boulder is moved aside so that Jesus can come out...and, if he sees his shadow, there will be six more weeks of winter."
Posted by Gary's third pottery blog at 5:17 PM

Love the pitcher, and you get extra Hubby Points for the flowers. If only more men knew how they can solve so many problems

Wow I never heard that joke! Mabybe it was time for new lids:)

Would it be in poor taste to say that would be a funny t shirt . . .

Happy Birthday early. I notice one fool was a she, the other two must have been he's.

I like that joke!!! I was in Japan when the little dictator shot off his rocket this weekend. A reporter asked a Japanese fisherman what he was going to do. He said, "I'll let all the important people worry about it. I'm going fishing."

A Maine fisheman would have said the same thing in the same situation, I'll bet.

Thanks for the great laugh, Gary, and thanks to Sil, too, for perspective.

Wonderful story, Gary! Love the twist.
And that vase is one gorgeous piece of pottery. So, how about stopping already?
I know, I know, it's your living, but will you feed me when I've spent all my money on buying YOUR stuff and can't afford to to buy groceries any more? Sob, sniff, boohoo, etc.
And live it up on Wednesday! Happy birthday!