Denis gets buried in snow 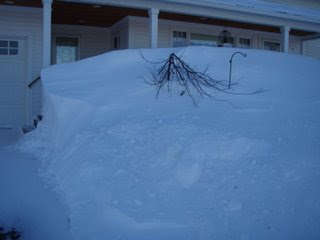 My old buddy Denis is a hero this week, living in northern Vermont which is having record snow falls (in a snowy place, think about what it means to have RECORD snowfalls). The newspaper wrote all about the snow, and Denis!

OK, and here is a wee little joke that Denis' and my friend Kim shared with us earlier:
A (not too smart young person) calls her boyfriend and says, 'Please come over here and help me. I have a killer jigsaw puzzle, and I can't figure out how to get started.'

Her boyfriend asks, 'What is it supposed to be when it's finished?'

The (not too smart young person) says, 'According to the picture on the box, it's a rooster.'

Her boyfriend decides to go over and help with the puzzle..

She lets him in and shows him where she has the puzzle spread all over the table.

He studies the pieces for a moment, then looks at the box, then turns to her and says, 'First of all, no matter what we do, we're not going to be able to assemble these pieces into anything resembling a rooster.'


'Let's put all the Corn Flakes back in the box.'
Posted by Gary's third pottery blog at 11:16 AM

Hope that Denis had some help, it's quite an impressive pile.

That is the best joke on Earth!

Hi, Denis! Gary! Maude! It is sunny and warm in San Diego. Time for a visit?

thanks cheri! i'm heading to the airport now.

Oh, what a braggart, that
cheri! But tell me, is there really ANY time when it's not a lovely day in San Diego, or have I just been incredibly lucky? As an ex-Navy wife, I have many, many friends from the 'good old days', retired and living in (on?) Coronado. Nize place, indeed!

I am jealous of the snow Denis is getting. Maybe I should move to Vermont?? Many ancestors lived there... I'm very much related to a bunch of the Green Mountain Boys.