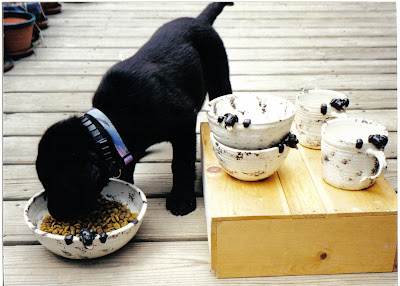 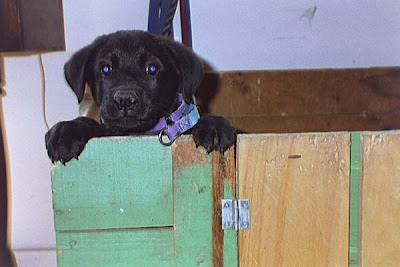 Buster is the quiet giant in our house, and his tenth birthday is tomorrow (along with the missus AND my niece.) Buster is the best dog I have ever met (Penny is totally charming and fun and sweet, but NO angel) and Buster is turning ten. I got him on my birthday when he was a puppy the size of a boot, and he grew up to be the biggest dog I have ever met. He is huge. Now he is very old, for a big dog, but the same as ever, clownish, sweet natured, walks 2 or 3 miles a day, a little arthritic, but OK.

Buster was living with our neighbors, and they were not good to him. Here's the story on that and the pottery he inspired, because it is thanks to Buster that I put the little animals on things. You see the first ever Buster pots there with him, spring 1999, and inside every cup and bowl I sold with him on the side there was a card and his story:

"Buster had no future. An orphaned black lab puppy, he was attacked by a goat and run over by a car when he was only 6 weeks old. The vet said he might never walk, and he was going to be put down. Instead, I met him and took him home. He is growing up strong and healthy. When I saw him hanging over the edge of his pen, lightening struck and "Buster Puppyware" was born, a new line of cups and bowls by Gary Rith." 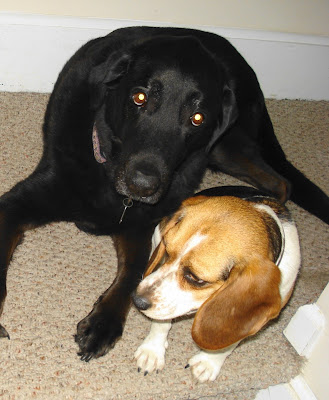 Posted by Gary's third pottery blog at 5:58 AM

I love a happy ending, so glad you and Buster found each other. I guess we all have a lot to thank him for, your cute and inventive little animal editions are a superb tradmark on your wares.

Lab puppies are the best. A gangly legs and goofy ears and eager to please and play.

i love buster. he really is an incredibly sweet and loving dog.

happy birthday to maude, buster, and the niece.

I had no idea Buster inspired a pottery line of yours, but I sure almost melted watching him as a puppy, 10y ago.

HAPPY BIRTHDAY!!! to everybody! It sure is a busy birthday season, isn't it??? (Dec and Feb, for us).

I love those pics of Buster! Give him a big smooch and scratch behind the ears, from us. Of course, you can do the same for Maude, too!!! hehe!

Row and Sow and Mow and Hoe and said...

First time here; I have to share with you the pleasure and pain I just experienced. I was searching for B. Kliban cats and came across your other blog, and I was SO enjoying the content, the photos, the pets, cats, dogs, the pottery (oh my, how beautiful - what a talent!) I continued to browse that blog, and suddenly I saw at the top of that blog "RIP" . My spirits sank as I thought to myself "Oh no... this is so sad. This very creative and talented person, skilled potter, animal-lover, cat owner, dog lover, "all things good" person is apparently no longer with us."

Then I found a link on that blog to this blog :)

Other than sharing that little "funny" with you (if you can call it a funny) I wanted to say while I'm here that I absolutely love your pottery. Some of my fondest memories are when we used to travel half-way across the state to go to Jugtown (Seagrove NC) to admire the all the pottery (and to fill the trunk up with wonderful pieces!)

It's been nice coming across you blog. And your pets and Buster are precious! Have a great day.

great story... dogs are the best. our perpetual love machine is named butchie. i rescued her from the pound when she was 2 and they had named her shayla of all things. she's a mutt and just turned 19. she's obviously not a large dog, medium size. at four she was diagnosed with blood cancer, some form of leukemia and after 2 years or injections twice a day and vet bills i don't even want to think about, she recovered. she's getting near the end i fear as she is practically deaf, can't see very well, skinny and i bit incontinent but she's not in pain so onward and upward. some friends doubted she'd make it through last year but she's here and we go for walks almost daily. she staged a hunger strike last year which worked and bacon is now a regular part of her diet. anyway, she's been with me so long, i'm not sure what it will be like without her... hell, for all i know she'll live to be 23. i think buster will outlive his expectancy too because of the walks, i've come to think it's the key to longevity... for us too.

Awe Gary this is such a sweet post. Not surprising either! You are such a loving man and it was a win win situation you bringing Buster home! I may have done the same thing! Something about dog lovers that tugs at my heart! Thank you for saving his life! Happy Birthday to Missus Cupcake, your niece and Buster!

Oh, I adore the puppy Buster and his own line of pottery! He is so cute, I would have taken him home and lack of fencing be d*mned! Esp. knowing that he has turned into a quiet giant. He's my kind of dog.

Emily Kitten looks a bit perturbed in the header photo, as if to say, how dare you take my photo and then talk about that big dog?!?

And lest I not get back online again this weekend, a very happy birthday to Maude!! :)

Thanks for the bit about Buster today! He is sooooo handsome and such a gentleman!

I also like the pic of my namesake at the top of the blog. Ever noticed she has one pink toe and the rest are black?

What a sweet story. Geesh he was a cute puppy. Happy b'day to everyone.

Happy Birthday to Buster and the Missus!!!!