a day not fit for man or beast 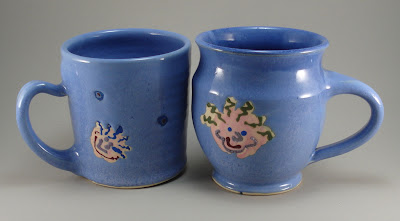 (cups by Gary Rith)
The weather guy in the newspaper tells us that this is the first January since 2003 when we have had snow cover every day of the month. He also tells us that the average temps for January are 9 degrees lower than usual. Then the weather lady on the radio tells us something about ten inches of new snow. You just sort of expect the weather to be awful in January, plus also February. And March. Maybe a little better in April, hoping for nice weather in May. So, you know, its all routine.

This new blog spot of mine (my first blog ran out of memory after 3,333 posts and 2 years and one month) is rapidly filling. I have used over 26 percent of its memory in 4-5 months, with no signs of slowing. :) SO, here's a short story for you. I had a phone call from a stranger in Virginia the other day. He had gotten the card from somebody who got it from somebody else. My cards are these messy little things I print on the computer. Or did, the printer hasn't been working lately (it was free, and 6 years old....but still!). So I was thinking 'man, what if I had a really nice business card, for the first time in my life, and I really passed them around???? Something people would remember and pass around'. So I ordered 1000 little beauties with a nice teapot photo. And this blog address on there. I was THEN thinking about how this blog will be used up about a year from now, and I better pass out those 1000 cards in the next 12 months. :) Then order 1000+ more. Maybe a different teapot pic on there, likely a different blog adress too.

SO, speaking of beasts, Spike is kissing Emily very sweetly, and then Emily tries to bite Spike's back leg and she jumps on him--Spike is twice her size and a whole lot smarter, but anyway....... 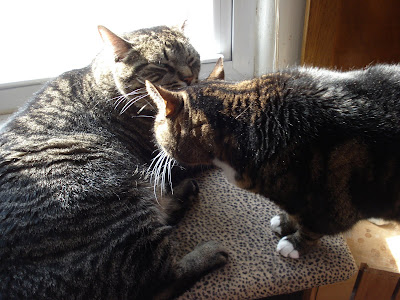 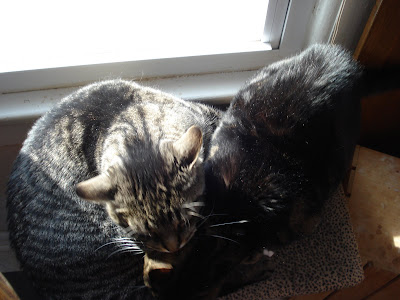 Posted by Gary's third pottery blog at 6:25 AM

Gary, what is UP with this weather?! You know school was canceled today . . . 11 minutes AFTER I got the kids out of bed. ARG!

You know what you might do to cut back on your memory usage (if Blogger allows you to do it)? Upload your photos to Photobucket vs Blogger and then use the photo URL in your post. I do that with my WordPress account . . .

Or perhaps you should create a separate pottery blog where you showcase nothing but your completed pottery pieces and maybe tell a little about how they were made and/or the story behind them. (But still keep your personal blog, of course)

Frozen tundra.....that's all that goes through my mind today...everywhere...well, except in the deep bowels of texas with Farmers wife...lol. uck...6 degrees here with a mix of ice,sleet and snow. Should make for an interesting ride to the parentals today...:( You've been frozen too long!!!!!
Love the pics....precious furkids!

6 degrees in Oklahoma????????
Lis, I have no problem cramming this blog full of nonsense. It is like cookies: eat one, then pick up another one....

i want one of your new business cards!!!

It's nasty here today, too! Makes me wish I was back in the bed with a big old heart shaped cup of coffee!

I totally heart those heart cups!
it's a funky cold, freezing rain kind of day here today, too. Hope you have a decent heater in the studio!

Have you considered buying your own domain address? You can forward that page to pottersblog4,5,6,7... and you won't ever have to change the address on your business cards. That is what I did with cinderelish.com. It forwards to my etsy shop for now, but I could just as easily forward to my blog or another shop easily. Only cost me $10 a year from Yahoo.

But, I wasn't expecting it (as I haven't seen the news or weather in days). Though, it would be nice to have Spike in my lap or laying across my feet right now.

Me too, I want a new card. Guess I'll have to order something else! Oh, and your little piggie on your home-made cards is adorable and a great trademark for you!

Oh it is cold here. 15*F currently. Second day of No School as more snow dumped early evening yesterday. Least they are cancelling BEFORE we go to bed :)

cinderelish has an excellent idea! I gotta check out everybody's blogs soon, I am so behind!

I can see snow falling at an angle as if it is coming from the south (towards Lake Ontario). Well, this is what happens in winter and some of us forgot.

Cute cat pics, Gary. I have that photo of Lake Champlain you inquired about.

2 days here of no school. Tomorrow may or may not start on time, but it SHOULD open at some point! I think they are saving money by not running the buses, and I am glad for the time off from being homework police.

DH recently got some free business cards. I will try to find out where he ordered them.