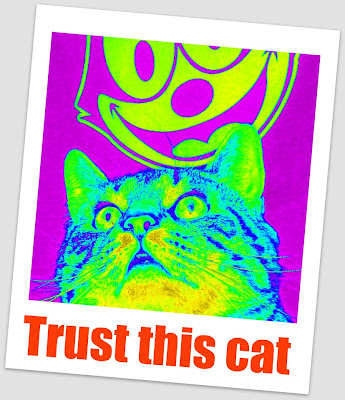 I try to ignore it, but my email box is stuffed full everyday! Let me answer a bunch of questions here at once:

"Spike, is it really true that republicans howl at the moon and suck the blood of innocents?"--Vlad from Des Moines

"Was that senator and his tapping toes in the airport a pervert, liar and hypocrite????"--Newt from Minneapolis

"Is Rage Against the Machine touring again?????"--Zack from LA

"Do some conservative republican governors feel that it is better to use the taxpayer's money flying off to see their mistresses rather than help citizens who need health insurance?" --Jen in SC

Listen, all of you, the only thing I can say with absolute certainty is that nobody has been able to prove that republicans howl at the moon..... thanks for listening--Spike the cat
Posted by Gary's third pottery blog at 8:53 AM

Gary, get yourself over to
http://alladither.typepad.com/halfassedkitchen/2009/08/chocolate-chip-oatmeal-pie.html
There is a dairy-free version!

I'm pretty sure I heard some republicans howling at the moon just last night.

wow a haiku spinning beagle and a cat seer. damn, why doesn't MY mutt do anything exciting. oh right. he went to jail this summer for 10 days. maybe i should share my jaildog's tale .......