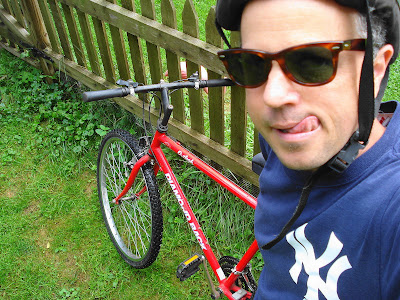 My bike is almost as old as my marriage--just two months younger! February 1993 me and the missus, she had been the missus for 2 months, were walking down Harrison St in Chicago, we lived near the Sears Tower, and passed a red bike in a shop window. Holy cats, I fell in love.
My wife, that sweetie poo, walked right in and told the guy she was buying it for me, WOW! Is it any wonder I love that woman?
I have a love and hate relationship with biking though. I am a total scaredey cat, with good reason:
--8th grade: hit by a car while biking through a green light correctly--in front of a police officer--sustained horrible concussion by smashing the cars windshield with my head, and in those days baby, nobody had helmets---and the bike was torn to bits
--biking across Broadway in Chicago in 1990 and a car turns into me and I slam it with my hand--me and the bike are OK, but the mafia-type azzh*le driving the car jumps out
"DO YOU KNOW WHO I AM??" and I tell him he hit me with his car, I have no idea who he is.....
--2001-2005: our street in New Hampshire had what turned out to be some kind of redneck drug dealers and they let their vicious German Shepherd loose all the time and I started carrying pepper spray and dosed that dog twice before I gave up on riding my bike (or walking my dogs) on MY OWN STREET

So, I love my bike, I love biking, but I have become a scaredey cat. I havn't been out yet this year, but the car goes up the road 2 miles to the mechanic today for inspection and all, and I wanna bike home.
The thing is, we live in the absolute NICEST area for biking on earth, not too hilly, plenty of paved country roads with little traffic, and I can ride along the river and it is the PRETTIEST river to bike along.

OK, so last month, I am driving across the Cornell campus and the missus is like
"STOP the car!" in the middle of a busy intersection
and I pull over and she is like
"there is a comfy gel bike seat cover in the road under the stoplight like mine, I want to get it for you..."
so, saint that she is, and it takes several green and red lights, dashes into the street and grabs the comfy gel seat cover and I am like
"thanks! Gonna soak it with disinfectant though...."
mmmmm...feels so good too.....
Posted by Gary's third pottery blog at 10:30 AM

*I* had a bike helmet in 8th grade (same age as you, remember) so I KNOW they existed back then. But maybe only in Seattle? (That would be because those Metro buses could run you right off the road!)

Oooh, way to get a FREE gel seat! I love mine.

I rode my bike like a maniac all over Brockport and never had a helmet or anything. I remember once coming down the big hill on Lancet Way at full speed and grabbing the front breaks in front of Todd Ibrahim's house and tumbling through his yard head over arse. It was kind of on purpose since I didn't have anyway to slow before the Hollybrook intersection.

I wasn't aware of your 8th grade accident. Was it the cop that hit you? You and your noggin have a very long accident history. I am surprised it still works... maybe it doesn't... i am sure it is out of warranty. ;)

Oh...You should see my bike. I even named her "MOISHA" and she just got a facelift after 20 years!
jen

I never had a helmet growing up. I don't have a helmet now either...I was thinking of getting an army helmet at the surplus store and wearing that around like a loon and shout, "INCOMING!" as I rode past people.

I think you are so brave to get back on a bike after all you have been through.
I love bike riding, but it really is a pain in the azz. I better get a gel seat cover too!

Reverend Awesome cracked me up!