Jason Statham will star in the Hollywood movie about my life... 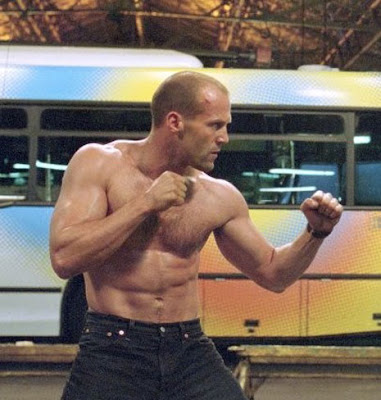 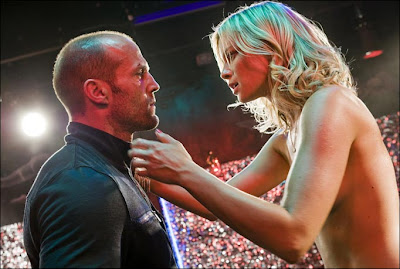 (and the delectable Amy Smart will play my delectable wife---Amy Smart isn't as pretty as my wife, and she seems really dumb, but she will just have to do...)
Jason Statham kicks AZZ. We saw CRANK last night, which is a stupid movie, but wicked entertaining. I totally dig his Brit-cool badazz persona....
Last summer we went to see DEATH RACE at the cinema and it KICKED AZZ and Jason KICKED AZZ. It was, again, stupid, but less stupid than CRANK and more entertaining.
For a movie entirely UNSTUPID Jason starred in the true story movie version (just as he will star in the true story movie version of my life) of a real bank robbery called THE BANK JOB and I challenge anybody to not like that movie....fantastico!
Posted by Gary's third pottery blog at 11:30 AM

You might like Amy Smart better in "Road Trip" co-starring Tom Green. I enjoyed Jason Statham in the Transporter movies. None of these movies are heavy stuff.

OH YES! We saw TRANSPORTER last month! They all seem the same, sort of, but satisfying!

Aloha Gary..
IF you like totally silly and wildly entertaining Jason flicks..
You HAVE to check out SNATCH and the second in the duo.. Lock, stock and two smoking barrels..
Both Jason, both hilarious but smart.. watch them in that order.. :)
peace, Kai n Md.

Yeah, Stratham is a serious bad-azz. I enjoyed the Transporter movies too. If Daniel Craig decides to stop being James Bond, Stratham should get a shot at it.

Dan and kai--I forgot those, and they were the BEST!!!!! We even owned them on videocasette once....
Jay, I was thinking that too....

He's good in War as well, but it's different from the others. It's a Jet Li martial arts flick. :-)

the bank job was good and the snatch movies and it goes downhill from there. the first transporter movie was pretty good

I actually just watched Transporter 3 last night... and admired the hot Jason Statham... and yes, it was a dumb movie but hey, I was entertained. :)