Romy and Michelle's high school reunion, and ME 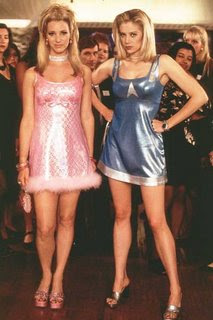 How to write this and protect the innocent? Plunge forward, I say!
I am not a reunion type of guy. BUT, if I had graduated from high school (rather than going AWOL 14 months early) it would have been 1984. 25 years ago this spring. Who cares, eh? Well, you get into your 40s, as I have, and you're still listening to the Talking Heads and Van Halen and quoting Monty Python skits and you say 'the world has changed but I sure as heck havn't'. Except for getting married, having a house full of pets and being a whole lot happier than my teen self, I am the same. Not even bald.
Anyway, came across a couple of old high school pals online yesterday.
Day one of 7th grade I sat next to -- because of the alphabetized seating chart, and Mr Washburn cracked a bad joke about --'s last name, and then for the rest of the year? Every time she raised her hand? He cracked the same stupid joke.
We had a lot of the same classes in the next few years, and she even lived around the corner from my house and we hung out from time to time. I had the hots for her, naturally, and even her little sister --, a year younger, but luckily we never ruined our friendship (s) by being boyfriend/girlfriend. I even named my new basset hound puppy after the little sister. Besides? Honestly? These two young women were waaaaaaay out of my league---waaaaaay too smart and beautiful for me. But we were pals.
SO anyway, we happened to move late in high school and I sorta left high school and went to college, but we exchanged letters etc. up until we were 22 or so and then it fell off...for about 20 years, until today! And do you know, she and her husband live up the street.....well, not too far away.
Posted by Gary's third pottery blog at 3:24 PM

You had a tall forehead in high school, Gary?

(boy, I sure am annoying today!)

I love reconnecting with my old HS friends! I still think it's strange any of us are old enough to be married and have kids.

so when are you going to see her?

you must share before and after photos. that would be cool.

as for me i've kept in touch with only one friend from high school (i hated h.s.; we both did).

Isn't it soooo cool to come across friends from way back then? I found some long lost friends on myspace last year, and my old neighbor from when I was 5 years old! It really is a small world after all!

I'm about your age and loved the comment about Talking Heads and Van Halen (the kids just roll their eyes). I recently (don't laugh) signed up on Facebook and lo and behold found some old HS classmates. It was fun catching up on what's new...

Okay, that is hilarious. As I remember, Mary Beth had a really bad pseudo Farrah haircut. Wendy had very pretty eyes and hmmm... I can see the basset hound resemblance...

NO NO! No resemblance! Just, um, a foolish boy and his puppy....

Wait, I was BORN in 83 and I'm still quoting Monty Python skits. Is that bad?

A friend of mine is a college professor. One of the kids in his class had NEVER HEARD OF THE BEATLES! (Okay, they did break up almost 40 years ago, but still.) I've reconnected with some old HS friends on Facebook, and got better acquainted with one I didn't know well then.
EH

Susan as Herself said...

Knight, that's just a demonstration that good taste is ageless. :-)

I've come across a number of old friends on Facebook. It's some pretty neat stuff.

It's great to find old friends! :)

Facebook has put me in touch with tons of people I haven't seen or heard from in at least 10-12 years. It's been interesting! You should join for fun. :)

And Romy & Michele's High School Reunion is one of my favorite movies, seriously!

1. Out of YOUR league? No such thing. You got the missus didn't you?

2. Everybody had a bad Farrah haircut, but we tried.

Hmmm... from reading these comments I would say you were wayyyy out of the R___'s(with an A) league. Bwah ha ha... it's still sooo funny.

Oh and I never had a Farrah haircut. I was way too cool...

I had a bowl cut, an attempt at the Dorothy Hamill look.