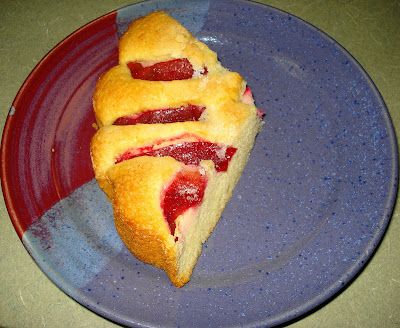 (plate and torte by Gary Rith)
My SIL Emily is a union carpenter in Manhattan. She worked on the AOL Time Warner building, whatever they ended up calling it. Currently she is on a school project, so they show up as the kids are leaving, and spend the night fixing windows and such.
Well, some folks asked for the apple tart or torte recipe I pictured yesterday. BUT I usually ignore such requests because I like to keep an air of mystery around me, and I figure if YOU come over, I can wow you with my pastries, and you won't ever know how simple they are.
So, Emily calls from the school where the evening's work is about to begin, and asks for the recipe, which came from my wife's, and Emily's aunt, but originally from their grandmother. YES! A family recipe. My wife's family were from East Prussia, that piece of Germany around Danzig which has gone back and forth for generations. East Prussia and Danzig are now known as western Poland and Gdansk, generally.
Anyway, my wife's grandparents had come to New York from Germany in the late 20s to practice as a doctor, but in 1931 or so they returned to Berlin so that he could start a surgical residency. The writing was on the wall, and although they were not Jewish or any other group immediately targeted in 1934, you had to be a member of the party to advance in the hospital, and they fortunately returned to New York, with their plum torte recipe and my mother-in-law and aunt in-law, who were just little kids.
OK, so that's where this recipe comes from, and it is wicked simple, really:
(btw--I do 95 percent of the cooking and baking in this house, because I am the house husband, and the missus does the more complex things that strike her fancy on weekends when she has time--my aunt in-law gave me this recipe around the time we got married because I loved it so much)
Plum torte

Preheat oven to 350.
Put 1/2 cup butter or margerine in a bowl and soften in the wave for about 25-30 seconds. Add 2 eggs and STIR madly untill nicely mixed, then add 3/4 cup sugar and stir madly. Add one cup flour and one teaspoon baking powder and stir madly until nicely combined.
Grease an 8 x 8 baking pan or I use a round one that is probably 10 inches diameter. Put all the dough/batter in there evenly. I chopped one huge apple and pushed all the pieces into the top of the batter this week, but for the original you cut a number of fresh plums in half and push them into the top of the dough. Sprinkle some sugar on top.
Bake 35-60 minutes, until edges are brown and it has cooked evenly and a toothpick poked in comes out clean. The margerine I used seems to cut the baking time hugely, so watch it!
Posted by Gary's third pottery blog at 4:00 PM

Okay, I'm lazy...I'd be leaving the skin on....are you supposed to peel it? My excuase is that you get more vitamins with the peel left on!!

I never peel anything!

Wow - that sounds wonderful. And easy enough even I could make it...maybe!

I do believe I will tell my lovely cooking-man about your recipe.

Yep, all the mystery is gone, now that I know the plum torte recipe is THAT easy.
I'm wondering if the recipe actually says to "soften in the wave"? If that's the case, this recipe is not near as old as you implied it is. Just sayin.

OHHH Yum!Thats all I can say.

What a great history share? And, the recipe that goes with it. Isn't it incredible how differently we live our lives compared to those a century or more ago?

Amazing. My Great Grandpa drove a Model T and my Grandpa and his brothers had to hold the stick in gear....what great stories those were....to relive.

How providential that you posted this when you did! I was washing dishes, and thought I ought to check on Kaeleb (my 2 yr old grandson). I found him sitting at the dining room table, and apple in each hand. Both had bites out of them. On closer inspection I found all five that had been in the bowl had bites out of them. (this in the span of about 3 minutes!) So, I made your recipe with apples. I added some cinnamon and it was really good with vanilla ice cream for dessert tonight!

Our family went on a mission trip to Poland many years ago, and were at a lake near Gdansk. On the way back to Warsaw, we stopped at Malbork castle, a center for the Teutonic knights. What a rich history there is in that area...I have some ancestors from that area too. :)

Gary, thank you so much for posting the recipe! I'm so glad to have it in my possession again at last. And thanks for posting about Grandma and Grandpa. Interestingly, the construction company I work for is staffed largely by Polish emigrees. They make excellent coworkers. Maybe I will bake up one of these for the crew. I'll bet they'd like it. I'll let you know.

My mom (your MIL) also recently told me that her paternal Grandmother came from a farm near a town that is now part of Poland. When she lived there in the late 1800s, it was called Kopnitz. Now it is called Poz Kopnica. (I found it on a map of Poland, but it is a rather small town, so if you're looking it up, you'll need a detailed map.) I asked the guys at work if any of them had ever heard of it, but all I got was some blank stares.

looks plum delicious to me!

I like the "stir madly" part best of all!

stir madly is a technical term....
Ellen, glad you made it and TT, I bet we're cousins!!!!!!!! I have cousins everywhere!
FW, they could only drive if somebody held the stick?????

Now that you gave us the fab recipe I just need a fab plate like in the picture to put it on!

Wow, Gary, thanks for baking such a nice treat for me on my plate! lol

Now if I can just figure out a way to get it to appear on THIS side of my screen...