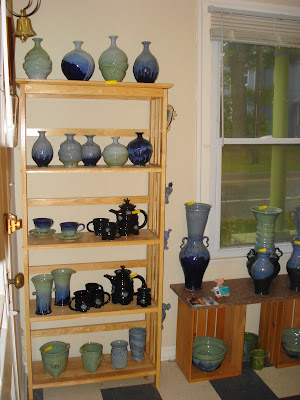 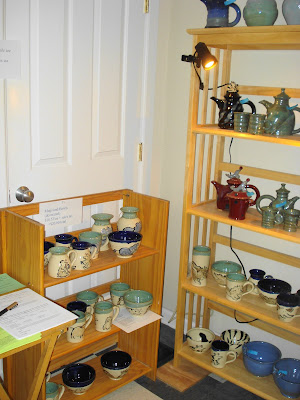 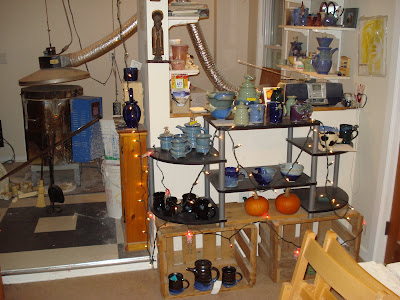 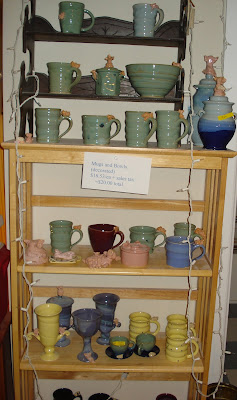 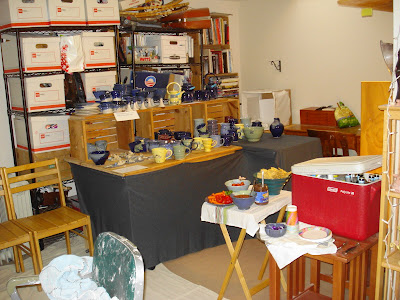 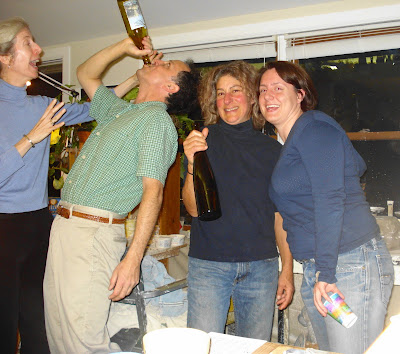 (le missus, me, Martha and Norah)
I figured that since I had to set up for today's open studios (11-5 Saturday and Sunday) that I might as well invite my Thursday advanced class over, plus other Cornell pot shop buddies. Holy cats, so many people came over--it is a small studio, but at one point there was 14 people crammed into this little space, the neighbors, I kid you NOT, called to complain (at least the police were not called) and both Tom and Martha (actually, to clarify, there were TWO TOMs and two Marthas at this party) had brought homemade wine from their bath tubs, and as you see from the bottom pic, it was finger lickin' good.
I got pics before everybody arrived, and then when almost everybody else was gone---it was too crowded to get across the room to find the camera. Plus the kiln was on, HOT.
Potters know how to PAR-TAY.....
So, the top pics give you an idea of what the studio is looking like--pretty festive...
Posted by Gary's third pottery blog at 6:19 AM

I thought all your neighbors were nice, Gary??? Someone actually called to complain???

14 is nothing. Just wait until all the Gallows get there.

i wanna join in all the fun too. pity i live so far.

Wow, G... your studio looks great! Have fun, and I hope you sell everything! :D

Looks like a great time.. you neighbourhood disturbance, you!

Did they neighbors call to complain that they were feeling jealous at how much fun people were having at your place? i bet that's it.

Nice to know you don't need either me or Maurice to get the cops involved.

Wish I'd been there!

I know how small that space is... 14 people?!? You must've been REALLY close! LOL

Well damn. I missed a great party just because I live 3,000 miles away. And I'm sick.

Wish I was there too!

Awwww, me too! But I do have a pretty good feeling I wouldn't like your neighbors. Just because you're an artist, you're not supposed to have fun, once in a while? Fie upon 'em. Or maybe they're mad because the personal invitation blew off their porch?