Steverino, Eva, Bill and the day of the bunny 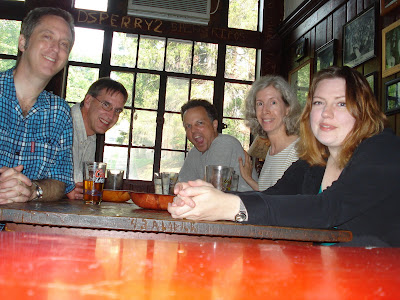 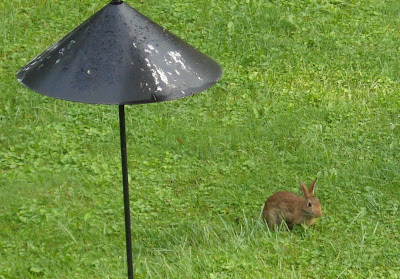 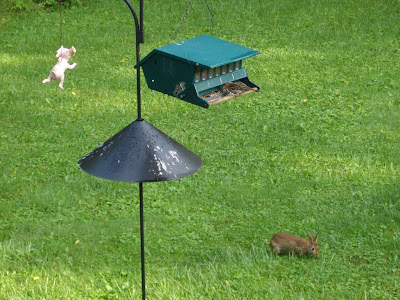 Steve comes by the Cornell studio where I am making stuff today and he has the spiffy HIGH TECH camera stuff and he's like "let's get some pics" and takes 467 pictures of me making things in the studio. (4-6-7!!!!) I have seen about 100 of them so far. One or two look good :) More on all this later. :)
So I say to Steverino after we're done "Steve, it's miller time, whaddya say we slide down the hill to the chapter house for some beers? The missus, Bill and Eva are meetin' me there", and Steve is no fool so he's like "SURE THING!" and we let gravity do its thing and slide down the hill and have the popcorn and whatnot....fab bunch of folks, we just love these guys.
Earlier??? Lookit this bunny. Tormenting my beagle. Just on the other side of the fence eating up our garden. Tis the summer of the bunny alright....
Posted by Gary's third pottery blog at 7:40 PM

Do I see a flying piggie too?

I want to go drinking at Chapter House!

That bunny looks like a model...you should toss him (or her) a few carrots in exchange for displaying all sorts of cuteness for your next "bunny run", ceramically speaking. Hmmm. is "ceramically" even a word? Probably not - but in any case, I think your friend's camera and a few carrots would serve you well - because that is one cute bunny - and I bet he (or she) would definitely be up for a few carrots!

However, YOU should be the one to pass out the carrots - the bunny should NOT eat your garden! It's a good thing that you have a beagle on patrol!

Your local pub sounds wonderful. Wish I could be there with you!

I see another Holy Grail clip coming... "It's only a bunny rabbit!"

What Fun! How cool! We need to all live closer!

[He used the action shot on his camera to capture you pottin your pottery...yes?]

Sounds like fun!!! I love me some cute bunnies too!

I think I can hear Penny baying...