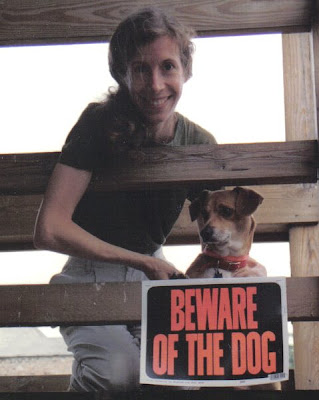 (the missus with our first dawg Petey)
YES, he was named after the Our Gang little rascals dawg.
7 months or so after we got married and were living on Chicago's near west side, twas July 4, 96 degrees and we went jogging at 4pm. 2 blocks from our apt. there was a dirty and cute little brown dog lying in the shade of a tree, very thin and covered with bloody bites on his head, and neighbors had been putting food and water out for him. I stopped in my tracks and asked the missus to go get some rope, because he was gonna be MY dog. (nobody in the neighborhood ever claimed to have lost him)
In the minutes that she was gone, I sat down 20 feet from him, and he moved away. I kept scooting over on my bottom until I could pet him. I just loved him so much from the first moment. The minute the missus got back with rope, I tied him up and we all stood. You could see the pride in his back, the confidence--he knew he had found his family, and we were going for a walk!
We took him home, and my bachelor cat Sammy was in the apt. and was like "NOOOOOOOOOOO!" but things were OK. We gave Petey his name and some cat food, which he wasn't much interested in (the neighbors who had been leaving out food had left out VERY expensive food).
I gave him a bath in the tub and he looked great. The bites he had suffered were actually superficial, and we walked up to the vet the next day. The vet figured he was part beagle at about 22 pounds, maybe part corgi, and YES, he could bark. The vet thought he was about 6, and sadly, when you would reach out to pet him, he would duck his head. Somebody was used to smacking him around, but as the years went on, he stopped worrying that we would hit him. We took the subway home with Petey. He was small, and we just walked through the turnstile and onto the train.
Petey was a perfect dog. We walked everywhere in Chicago, day and night, and he was a killer. Anytime somebody came near us, he growled and snapped. One night somebody was trying to steal stuff off the back porch in this pic, and the missus let him out and he went bananas chasing the guy away. More than once we were walking in the country and a dog of any kind came after us, he snapped them away. After a German shepherd tried to attack us in the street one day, Petey chased it to its yard and pooped on its foot. Our vet told us dogs don't look in the mirror.
For all that, he was totally cuddly and sweet, the absolute best dog.
He almost lived forever, died just about age 19, one month after we moved from New Hampshire to this house in 2006. He is buried out back. He was totally healthy and happy up to his last day, and it is like he wanted to get us settled in our new home before he moved on.
My SIL found this pic and gave it to us Saturday.
(all of our dogs and cats are strays with sad stories, and all of them are wondefully behaved, healthy and happy--we are really fortunate. Readers here know that Penny the little beagle moved in with us 2 years ago, and although she never met Petey, she is so similar to him it's amazing, except she is not as fierce with strangers).
Posted by Gary's third pottery blog at 12:06 PM

What a great story, Gary! Petey sounds like he was a wonderful dog! :)

Oh that is a great story, Petey was so lucky he found you guys to take him home. Your story sounds very similar to Scouts. What a wonderful dog Petey was and Penny is too of course :o)) He looks so cute in that pic.

Your story sounds a lot like the story of Courtney finding Rafiki.

P.S. I'm sorry Petey is gone. But I'm glad to know the story.

That's such a beautiful tribute to your beloved Petey. I love the line "Dogs don't look in the mirror." I know a JRT who could attest to that. The thought of him ducking his head makes my insides lurch. I just don't get how anyone could hurt a critter. I'm so glad you made a home for this pooch.

Thank you so much for sharing Petey's story with us. He was well loved, we can tell!
Our rescue boy Ozzie, he still thinks someone might hit him too...I am hoping after some more time, he will realize we don't roll like that!

RIP Petey... sounds like he was AMAZING! Ooooh, and tell M she looks HAWT in that pic!

I love stories about how people and their pets became a family! This is sooo sweet!

Dink is decidedly unfierce. She's attempted to get into strangers' cars at the park. She loves going for rides! (Perhaps how she ended up at the pound) Everyone is her friend.

Her little feelings got hurt at one of my sister's softball games. My mom had a jersey made for her, school mascot and her name on the back, and she went up and watched my siblings play ball. Well the softball fans weren't as friendly as the baseball fans and no one stopped to pat her. She sat in the middle of the walk way and still no one stopped so she laid down in the middle of the path and whimpered. Crushed that everyone wasn't there to see her.

What a beautiful story, Gary... I think I love Petey.

The Missus is a beautiful woman. And looks so happy in this picture.

What an awesome photograph.

What an awesome story.

I love coming over and reading stuff like this, especially on a crummy day. Which today is. So... Thank you. :)

Aww... what a good fuzzlebottom. I love dogs. They're just so understanding, and it seems like even though they don't 'talk', you can still understand them. Shelby Lou is a rescue dog. She was in the middle of the road on my way to work one day, and she's still here, being silly and wagging her big dumb tail. She shys away too.. people that abuse dogs should be abused. >:|

Anyway, nice story G. You get one more notch on your punchcard into Doggie Heaven. :)

Everyone has already said it all, Gary.

I really do feel sometimes that there are some friends we were always going to meet along the way - I think Petey and you were absolutely like that. Wonderful story, thanks Gary

great story of dog love... it should be a movie