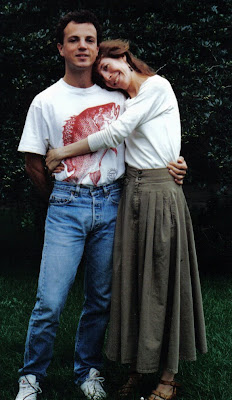 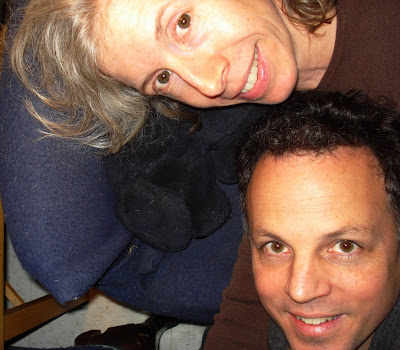 (Gary and Maude Rith, 1992 and 2008)
It was a pretty unlikely relationship, from my perspective. How could this gorgeous woman be interested in me? I still ask that. How could this smart, kind, talented person be interested in me? She is, and I am lucky for it and thank God every day. What a smile too.
We got married Christmas Eve 1992 having known each other 3 years but only having dated a very fast 5 months before getting engaged in July and less than a year before getting married at the Drake in Chicago, December 24, 1992.
But then again, maybe I should have known, the ultimate boyfriend-girlfriend test: do you love Queen? She does and that decided it.
Here's My best friend.

Posted by Gary's third pottery blog at 4:51 AM

Happy Anniversary!!! That's a sweet photo at the top! (Hey - I used to have a skirt just like the one Maude is wearing, only in light blue!)

Have a happy day!

Congrats, you two! We were 17 in August. Time flies, doesn't it?

You said it Gord.

Happy Anniversary to you and Maude. I wish you many, many more years of happiness. :)

Y'all are absolutely adorable!! Completely! And, the song....sigh. Too sweet!

HAPPY ANNIVERSARY!!! If we are your neighbors next year........we'll have a dinner for you! You might have to provied the food though, as my befan cooking leaves alot to be desired. :)

Have a great holiday and Happy New Year!

We just loaded up my email and had an invitation to a Venison New Years Eve party. I AM NOT KIDDING YOU!!!!! I need to get out of the sticks!!!

Happy Anniversary! What a sweet story.

Happy Anniversary Gary & Maude! Have a wonderful anniversary and holiday together.

Happy Anniversary, you two! To think I was there when it got started. I was visiting Maude and you invited us to your studio near the Chicago zoo. It was Christmas 1991...Sammy the cat was with us then, too.
EH

Happy Anniversary Potter and Wife! I love that first picture of you guys. You almost look defiant. In the second picture you can really see the love shine through. Here's to many more happy years.

Thanks for the referral Gary.

Wonderful sweet old picture, too!
May you have many more wonderful happy years together.

happy Anniversary. Oh how young we all were back then.