"It pulls down my pants and taunts me"

So, me and the missus are talking love at the breakfast table. But first she has her advent lottery ticket of the day, and the prize is 500 bucks!!!! And she scratches, and scratches, and scratches.....all promise and no cash, a LOSER ticket. And she reminds me of Dieter saying on SNL:
"It pulls down my pants and taunts me"

And she describes at the office, since boss number one was out, they spent the day gossiping. About love.....
Various people in the office described the first meeting with their spouse, and knowing: "that is the one I am gonna marry!".

Our story is better than that, me and the missus, but let me share our secrets with you, esp. because our 16th anniversary is next week :)

In the spring of 1991, I was walking down the street in Chicago with the person who would become my EX in 3 months. Under the elevated train tracks near the school where I taught, we bumped into an aquaintance of mine, and I introduced the (soon to be) EX to that woman and cheery pleasantries were exchanged. The EX turns to me and says "I bet that woman becomes your Missus Rith". It was totally out of the blue, and I had not even ever shaken the hand of the person so designated....but 6 months from then WE did start dating and then married December 24, 1992. Can you imagine, your soon to be EX psychically suggesting your next lover? 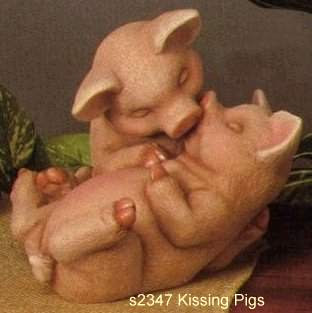 NOPE, not made by me.
Posted by Gary's third pottery blog at 6:57 AM

You're right, that story trumps all. I can't imagine what would possess someone (especially the person you were currently WITH) to say that you would latter end up with someone else! Crazy...

What an amazing story! Sounds like the EX had some snap :-)

hmm, a bit freaky! It sounds like you and the Missus were destined to be together. And you EX knew it before you! :)

the EX was, and I am not joking, seriously into occult and psychic type things, and I suspected for about ten years, before she met and married somebody else, that she was doing some voodoo doll type stuff against me----just a little nuisance stuff, gone since her own marriage :)

Sweet story and sweet little pigs and not made by you? Love your elephants with personality in the previous post.

I DID make the wee piggies on the header today

I love the wee piggies in the header - they're so cute! Specially the one with his back legs crossed.

What a spooky story! That gives me chills, but aren't you glad she was right?

I would thank the ex for the good idea. Great story!

Ok, that's just bizarre. So you were dating a psychic?

I'm so glad she was right!! You guys have the cutest marriage, I can just tell how much you love each other. It's obvious. You are both AMAZING!

Susan as Herself said...

I met my wife at her friends birthday party. The party had three cliques; a group of young women discussing their school stuff, a group of guys talking about their cars, and a group of computer nerds (my group) talking about computers. I didn't want to jump into the two foreign cliques and make a fool of myself, and I didn't want to talk about computers with the same geeks I hung around with all the time. So I went upstairs to find alternative chat opportunities. There she was, playing cannonball blitz on an Apple ][, so I offered to play with her and I knew then she was the one. It was the last time she played video games as well. :)

Ack that's too close to home. I've had two people utter similar declarations that turned out to be right.. about the same person. Both by his soon-to-be ex's but currents at that time (if that makes any sense). We were both totally in denial.