hour by hour, the final chapter :)

Friday morning I decided to take a pic of what I was looking at every hour on the hour. It was fun and then I did it again Saturday. That is enough.
Although I wanted to be honest and:
a) get a shot of what I was really doing, not set up the stage for something special
b) not fuss over the pics much, just get a snap shot

I have to admit, there were obviously a few times the missus had to help a bit or I used the timer. It is also true that unlike the dude with 8 kids, if you feel like people are watching, you are better behaved and more diligent than you would be. At least that is true for me! 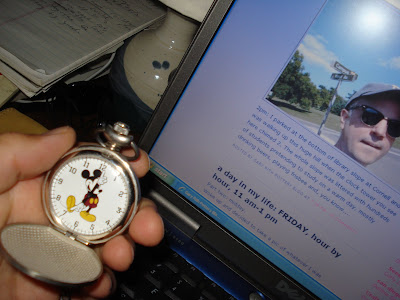 7am Sunday, now: ENOUGH. I have done this 48 hours. Long enough. That is my Mickey Mouse pocket watch, the missus gave it to me 5 years ago on my 38th birthday and that is etched on the back :) 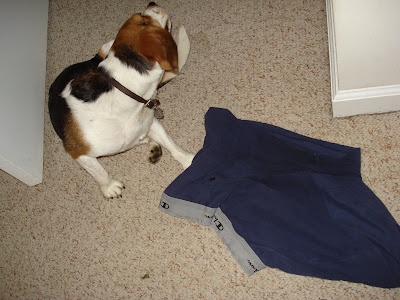 9pm: the shorts hit the floor again, and I will let you draw your own conclusions .... :) 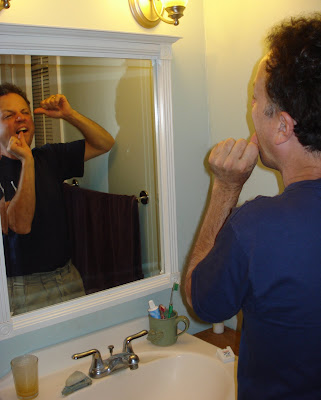 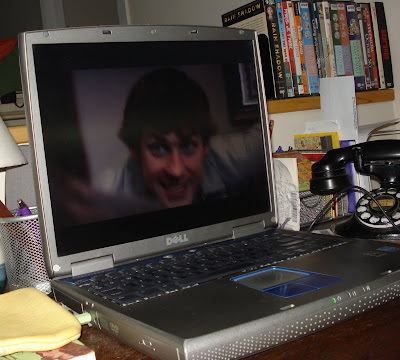 7pm: watching THE OFFICE with the missus on the computer, then I dreamt of Jim and Pam all night. I swear I love those 2 ....... the BEST TV program on earth....
Posted by Gary's third pottery blog at 7:01 AM

It's hard to maintain these kids of projects, but also a lot of fun while you can. :-)

Why is that poor dog reeling away in horror?

i knew it would eventually come to this, posting every hour! i hope you don't feel like posting 3 times an hour. i have to admit though that you lead and busy, active life with many varied experiences on your average day. i like the big bottle of beer and going to the chapterhouse. maude must be a pretty good sport taking pics of you all day or did you get that lawnmower shot with the camera's timer set to 30 seconds?

G, this was all SUPER fun. Loved it!
Someday I will do this. On one of those days where I know I won't just be staring at a computer screen all day.

You and Maude are funny bunnies.

Your reality posts were interesting. Thanks for letting us tag along.

I'm glad you used discretion... although now the world knows what kind of shorts Gary wears!!

Gary you're crazy! I love reading your blog! You never know what you're going to get, and it's always captivating...or at least entertaining. LOL! Hope you and the missus are having a great weekend!