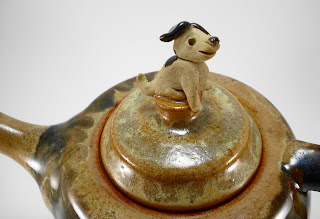 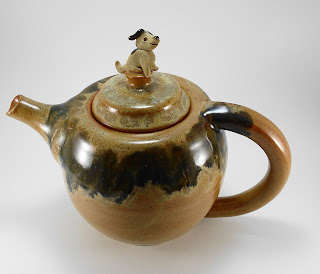 (teapot by Gary Rith--I just tried this glaze combo out at Cornell studios, and yeow! kinda cool)
So, wide awake at 4:51 on a Sunday, dark as can be, warm and humid outside, fed the dogs who went back to bed.
FINE!
We went to the Apple Festival yesterday and saw Denis' ladyfriend Kim and had a rollicking good time, except where was the camera? I had been placed next to the fudge people when I did a festival last year myself (selling through a booth) and they were there and they are my pals too, and they gave us free fudge when we said hello, how nice is that? We went to the hippie bakery up by the Cornell campus, a place I absolutely LOVE, and were sitting there forever eating and gossiping about, among other things, Denis, and this large group of what we used to call YUPPIES came in. So, the place went from being empty except for us went to standing room only. They were all 40ish, the guys had been in a frat together, and they had left the homecoming football game because of rain.
Now, we were on the bakery side, which has the counter and coffee and bakery case and a few tables and chairs. There is one server there at the counter, and we had bought our stuff and dumped money into the tip jar and we had enjoyed ourselves, but these yupiies, they had no manners. I think they had drunk TOO many and were just sitting out the rain, but they had the counter girl running all over getting drinks and orders, and she isn't a waitress, and they never gave a tip, plus they were yelling and all the rest, really boorish.
I guess it has been a long time since these bond traders and insurance salemen ever had a job cutting grass, washing dishes or working a bakery counter, but how do some people (read: yuppies in their 40s who think they're big shots 'cause they went to Cornell) grow up thinking its OK to act like a drunken lout and make some poor minimum wage slob run around like a slave, and don't even put a nickel in the tip jar? Is there a special hell for people who are that insensitive?
Posted by Gary's third pottery blog at 5:24 AM

I love those places where you can sit and chat - have a coffee and a large piece of hot homemade crusty bread slathered with lots of butter...Mmmmmmmmm.

We have the uppities 'round here too that ruin everything with their boorish and pompous behavior.

That glaze is great - what a nice combo!

Oh, and that behavior is reprehensible. Seems so many today expect perfection from all service personnel...I expect good service, but I expect myself to respect honest work - to be gracious and kind - we all know what it feels like to be disrespected. It's just plain hurtful.

In Southern California those personalities run amok. I call them the E.C.s (Entitlement Complexes). The rules of the road, the need to RSVP, waiting one's turn, and treating everyone (including the gardener, server, or housekeeper) with dignity and respect. This is my pet peeve.

Oh, see how I got going on that subject? When what I meant to say was:

I really like that glaze. Laura wants to know if you mix your own glaze? I'm wondering if you're going to use that glaze on a mug.

I DO mix my own glazes most from my own recipes. This one is from Cornell U, and I am not sure what it is, they have their secrets....so, to explain, I use a different set of glazes up there which I do not mix.

Nice teapot!
I like making teapots...
Oh, And I'd have said pitcher too, but too late now. Favourite pitcher/jug maker in the world? the late Mick Casson, he was a lovely man, I met him several times, and despite being what you might call a superstar of studio pottery, he was never in the least bit arrogant.

In your story of the yuppies, oh yes, how very disgusting these people are. My local pub had a group in a while ago, it's a friendly place, by the highway, all manner of people are regulars, plumbers, farmers, architects, butchers, airline pilots, builders, teachers, we all get along well, there's a noisy end and a quiet end, dogs sleeping in front of a log fire.
In came the yuppies. And proceeded to be loud, and rude, to the new girl behind the bar, calling her an idiot because she could not remember their order, and had to ask again.
In a moment, the ringleader felt a hand on his shoulder, a very large hand, and farmer Rick said "calm down, now, boy, and apologise, there's no need for that sort of language." "Get your fucking hand off me, bumpkin!" came the response.
In a moment, the pub was silent... as yuppy boy was walked to the door, and cast out. The Young Farmer's Club stood up.
The rugby lads stood up.. the rest of us stood up... and the yuppies left.
Nobody insults our barmaids.

Entitlement complex... yuppities... must remember those!

Now THAT'S a great story Soubriquet! And my kind of pub, too!

I hope there is a special kind of hell.

thanks all, and Sou. that is a GREAT story!

and can I get a kettle like that with a blue(ish) glaze and a yellow lab? Pealllease.

You bet there's a special place for them....Karma hell...one day it'll take a big chunk out of their hiney and they'll stand around scratching their collective b@lls wondering 'why me'....

Wow! That glaze has a very cool look.

The jerks not tipping will get theirs. I believe karma comes around in triplet. I certainly hope so.

Love the teapot! Do you have ones with horses?

One of my prior bosses went to Cornell, and I must say he's a gentleman apart to those louts you mentioned. He has a good career in A&M work, and a polite manner. He used to work on the Cornell newspaper.

Don't worry about the non-tippers, it always comes back on them eventually.

I can't believe I lost your blog for almost a week, and have been so busy I didn't realize it until today!!! (the shame! the horror!)